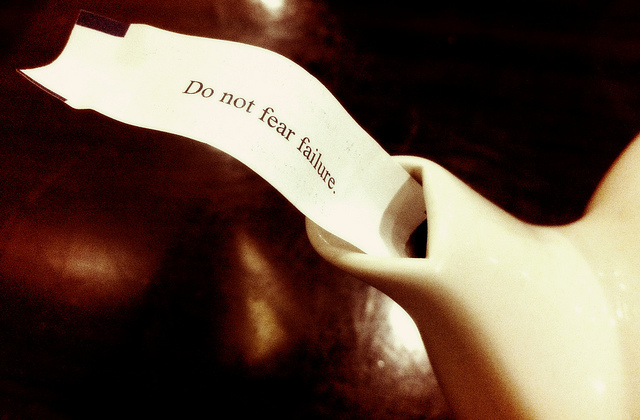 This is the lesson that I, and most of the people I know, learned as kids and into adulthood. Don’t be a failure, don’t risk failure, failure is not an option, no cookies if you fail the test, failure is BAD.

What if they were wrong?

How do you define failure? It’s different for all of us. The dictionary is pretty straightforward, it says that failure is ‘the lack of success.’ Short and sweet, but not entirely helpful. So take a moment and think about what failure means in your life. For myself, failure used to mean not taking any risks that might result in a socially unacceptable image of me. It meant avoiding ‘danger’. It meant constantly living in low-grade fear that something would ‘mess up’ and then I would fail.

I kept the job I hated to avoid the fear of not having a job and being a ‘bum’. I stayed in the relationship I was in so that I wouldn’t risk being an old single person.

According to my definition, and the definition of most people, failure is a social construction. We avoid failure so that we don’t look like fools to those around us. Hmmmm…

How does this affect our lives?

So what does it mean when we avoid taking risks? It means that we focus on ‘staying safe’. When we focus on staying safe, we focus on not changing. Deep down inside all of us is a voice that tells us that what we have been doing up to this point has ‘worked’ and it has kept us alive and safe. That same voice tells us that if we don’t want to fail, we have to keep things just as they are.

Yet, almost everybody wants some kind of change in their life. Whether it’s to quit the job they hate, get out of a bad relationship, lose weight, start a business, or whatever the thing might be for that person.

You see the problem here. We work hard to stay safe, which necessarily means that we avoid change, even if that change is what we really want deep down. Then we all wonder why we feel so much cognitive dissonance about our lives.

How can we redefine failure to serve us better?

What if ‘failure’ was an opportunity to learn? We don’t call a kid practicing violin in the basement a failure when he messes up the music, we call it practice. What if wasn’t considered a failure when you quit the high paying job you hate in order to pursue something you are passionate about? What if that was just practice too? What if you were just practicing life?

What would be the downside? Would the people you care about most suddenly banish you from their lives for ‘failing’? Will your loved ones suddenly stop loving you if you decide to pursue what you really want in your life? Probably not.

It is scary. That never goes away but it does get easier. It is not any scarier than thinking you are missing your opportunity to get the life you want every day.

It is empowering. Something magical happens when you are willing to fail – all of a sudden the fear loses its hold over us. We are able to take control of our lives with intention and build our dreams. The confidence from this allows us to balance out whatever fear still lingers on.

It is inspiring. When you choose to fail often and iterate quickly the people around you will want some of what you’ve got. It’s infectious for others to see somebody step away from the fear.

What does ‘iterate quickly’ mean?

There are two sides to this change in life. If you are going to embrace failure as practice, that means that you have to be learning when it doesn’t go according to the plan. Einstein was right when he said that doing the same thing and expecting a different result is insanity. So don’t do the same thing. Change a variable. If you think you are on the right track then change something small (ala Thomas Edison and his thousands of failures to get to the light bulb). If you recognize that you are the totally wrong track then change something big (like quitting a job you hate).

Every time you fail, iterate and try again. This is the scientific process brought to your day-to-day life. It leads to fast learning, a deep understanding of whatever part of your life you are working on, and huge results.